It’s that time of year again when couples celebrate their love (out of obligation or desire) and singles wallow or embrace their singleness. Looks like our favorite Ryan T Anderson is in the wallowing camp. His “woe is me” is indirect though, and not obvious unless you’re familiar with him.

He wrote this piece on the topic of love for Valentine’s Day: Does love really equal love? I’m going to be honest, I only skimmed it. Ryan says the same things over and over again in slightly different ways, so if you’ve read a couple of his pieces that’s all you really need. This one was more of the same: love is not all equal, same sex relationships are different (meaning inferior), oh heavens to Betsy! Oh, and straight people ruined marriage and opened the door for those pesky gay people to get married. Damn straights!

Who is Ryan Anderson? He’s a man in his mid 30s who has never been married and does not appear to even be dating. He’s Catholic, but he’s not a clergyman. He’s educated, employed and a decent looking guy when he’s not letting his beard grow out of control. Why is it that he’s single and had no discernible history of romantic relationships? END_OF_DOCUMENT_TOKEN_TO_BE_REPLACED

Guns and religion in one blog post? Yes I can! Let’s do it…

Remember a few months ago, after yet another mass shooting–I literally can’t recall which, there are so many–when America, driven largely by social media, collectively decided they’d had enough “thoughts and prayers” after gun fatalities? Twitter exploded, and the New York Daily News printed the iconic cover seen below. 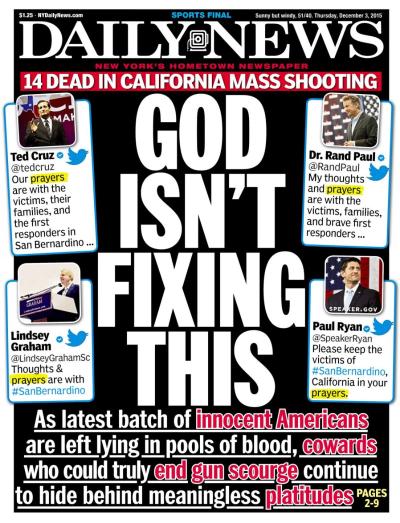 This was the result of pent up frustration, sadness and fury over the current state of violence, particularly mass shootings, in the United States. Time after time these things were happening, and time after time we saw our elected officials, who could and should be doing something about it, sending their “thoughts and prayers” out to the victims and their families. It pissed us off. It pissed me off!

There is always a subset of religious folks–largely Christian, let’s be honest–who relish playing the victim. This provided an excellent opportunity. The term “prayer shaming” was born. “Our religion is under attack!” they cried out. They seemed to think they were being criticized for praying! But they weren’t. By and large, we were criticizing those who had the power to take meaningful action but who either did nothing or actively impeded attempts to do something.  END_OF_DOCUMENT_TOKEN_TO_BE_REPLACED

Part of the problem is that I’m busy. Another is that there is so much shit going on it can be a bit overwhelming. Do I blog about Laquan McDonald? The election (and which part)? Other gun stuff? Other LGBT stuff? There is no shortage of topics. And I’m not one for writing short and sweet posts, as anyone following me for awhile probably knows. It’s daunting to sit down and write a full blown post on a topic I care about, complete with many quotes, references and links.

On the personal side, not much has changed. Work has been pretty unpleasant for the last few months, but it’s started to ease up, a bit.

I do want to blog more. There’s lots of shit bouncing around in my head it might help to put down on “paper”. Wish me luck! And, if you still follow, it wouldn’t hurt to leave a note of encouragement below; to a large extent I write for myself, but having engaged readers is certainly a nice bonus!