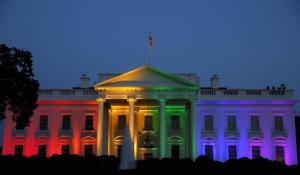 Well, I guess I should say something about what happened last Friday. I’m speaking–of course–of the Obergefell v Hodges Supreme Court ruling that states could not prevent same-sex couples from marrying.

It’s hard to overstate how significant this was. Many people correctly point out that marriage equality is not the end-all of LGBT equality, that there is still much to be done. There is, it’s true. But to many of us, until recently this was unthinkable. Most of us grew up, came of age and started dating without any hope of being able to marry some day. I didn’t think I’d see it in my lifetime! And yet, thanks to 5 Justices, it’s here today.

The announcement came around 10am Friday, and I was totally useless at work for the rest of the day. I tried to concentrate on my tasks, but couldn’t. I followed the love and joy on Twitter, and I found myself tearing up at various times throughout the day. While I normally spend a fair amount of my Twitter time keeping an eye on the opponents of equality–and refuting their lies and distortions–I decided to take the weekend off, and to just be happy. So I hid those lists, and surrounded myself in love and happiness, and it was great!

Now it’s Monday, the weekend is over and it’s time to get back to the real world. There are still a few battles to be fought for marriage, and much more work to do for true, full equality. But those fights all look a bit more winnable in the multicolored afterglow of such a momentous victory. I’m invigorated to keep fighting the good fight, and not just on LGBT issues. Cops, guns, racism… as long as people are mistreated, oppressed or getting killed for no reason, there is more work to be done.

P.S. Seeing the White House lit up in rainbow colors, not to mention all the other shows of support from the executive branch of our government would have been hard to imagine a decade ago.

A huge step forward for every single person in America. To be equal is to be free. Proud that #LoveWins!

Every day we see so much trouble in the world. With the #SCOTUS decision, I am proud to celebrate that in America #lovewins.

Sure, it’s just symbolic and to some it may seem small, but it’s not. It means the world.

Also? The White House. No, it doesn’t mean anything, but it means everything, at the same time.

I’m sure by now everyone, even my international followers (hi, guys!) have heard about the horrific mass shooting earlier this week at a South Carolina church. You may even know the name of the shooter. But how many victims can you name? Any at all?

It’s a sad truth that we remember the names of mass murderers, but rarely the names of their victims. This is, in part, a numbers game; by definition, there will always be more victims of mass murderers than there are mass murderers, so that’s fewer names to memorize. But the media also plays a significant part in this. They put orders of magnitude more emphasis on the killers than the victims. And it turns out this may be more than a sad injustice, it may be dangerous.

The video below is from Charlie Brooker–who Wikipedia calls an “English satirist and broadcaster”–while working for the BBC, in response to a mass shooting in Ireland. It was a complaint and a plea about how the media covers these events. Give it a watch (it’s only 2:48) and then join me below. (h/t to someecards, where I first saw this)
END_OF_DOCUMENT_TOKEN_TO_BE_REPLACED